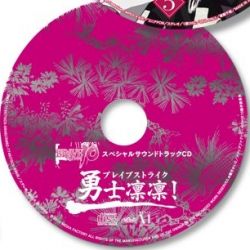 Enclosed in BRAVE10 Vol.5 DVD/Enclosed in BRAVE10 Vol.5 DVD/BD (ZMBZ-7745/ZMXZ-7735)
Wow, what a cover!  Not that the cover makes a soundtrack.  As stated above this CD is packaged with the fifth DVD volume of the Brave10 series.  I was not too impressed by the teaser trailer when it first came out a year or so ago.  The music didn't fit the time setting, however, it works with the fast paced action.  Yet here I am, reviewing the music, despite how uninspiring it was in the demo.  To be honest, I don't physically own this.  I haven't even bothered to obtain it.  Fortunately, someone uploaded it on youtube, thanks to user Zax Kuroyami.

Main theme is a rocking opener with a nice melodic ballad.  He does go over the top though, in the later half's acoustic melody.  The percussion could use a little boost so that it can be heard, as they are well performed.

Fukusuke wrote track 2, while track 12 is composed by three fellows known as gennbu, koujin, and sayroo.  Never heard of them, but OK, no need to bother and research them.  They are instrumentals, probably meaning they were songs?  Anyway, Nagaoka treats the composition with ethnic Asian strings, and a hip beat.  The final track gives a funky guitar solo opener, followed by a bass, leaving off with a satisfying finish.

My first run through the music provided, didn't leave much of a mark in my few brain cells.  However, now that I'm thoroughly listening to it, the quality is much higher in some of these pieces.  Mostly in the slow, melancholic ones though.  For instance, in tracks 4, 6, 8, 10, and 11, all have movie quality music in them.  Emotional, moving, riveting, and powerful as well.  This whole soundtrack is one of Nagaoka's most generic, yet a few listens can really make anyone understand any of his works.

I especially like the touching theme for Heion Buji, track 10.  A harp paired with violins and oboe that is dying to bring tears to whomever listens to it.  The following track is more suddle in approach, but manages to get sweeter in the middle of things, before it soars with its melody.  Track 8, Taizen Jijaku, and 7 as well, is worth listening to, as I find it hard to explain just how it can change a mindset.  Track 4 is rather the most generic of them all here, but in its own right, an excellent slice of life theme.

Third track rocks its own ballad, like in the main theme, only being more original.  Nothing spectacular there, in fact, its just passable at least.  Kienbanjou, track 5, is a little more on the upside of the continued rock influence.  Seikou does get serious for this track, but the jingles do throw it off bit.  In track 6, a change of tone with the anxious violins, stalking piano keys, and mysterious cello leading the other strings.

The highlight of the soundtrack is track 9, which is a more elaborate and paced version of the main theme.  However, I still don't like the acoustic wind work, though the touch of flamenco is new.  Now, I am out of tracks to cover, as I was imagining I haven't started.

Being a special release, I'd say this is a fair and deserving grade.  As I stated before, for one of Nagaoka's most bland and low key efforts, it has many glimmers.  He's used some styles here that were very new and fresh.  Only a few pieces are able to sink into right away, but that is what makes this musician unique.  I have to listen to each composition a few times just to understand the style.
Album:B+
There is no grade for package, as I do not own it.  Someone who's already collecting the series, is going to be happy to have this very small sample of the series music.  However, for us who just want the music would have to spend nearly $100 to own it.  At least, its not only for the music, I'm sure the other content can be consumed.  Had it been a full soundtrack, giving up a Benjamin wouldn't feel bad.
Posted by JHL at 4:07 AM No comments:

Nintendo has finally awakened to advertise one of their most elusive franchises.  The slew of advertisement is very encouraging.  In fact, I don't think they have done one since Fire Emblem's debut in the U.S.  No matter how bad the game feels to me without its original creator, I will still be buying them.  The big N has done more than just bring it to other territories, but they really put more investments with the title.  There probably is more advertisement than the Metroid series games.

I am happy that the latest has eventually been given the chance to go outside home territory, the previous installment, Heroes of Shadows and Light, did not even get bothered with.  Especially, given at the time of Heroes release, most RPG's weren't going to be published in America.  Now, most of those games such as, The Last Story and Xenosaga have eventually made it out, thanks to the movement known as Project Rainfall.  In which, Nintendo officially replied the consumers outcry to have an American release, simply by saying "NO!".  Instead, NoNintendo gave us Kirby, but at least now they seem to be becoming like Yes Man.

Since the announcement of Awakenings release, I was relieved and actually less enthused by it.  Though given that all this hype and showcasing all around, I decided to download the demo on my handheld after vacuuming the dust filled box of the 3DS that I have barely opened.

The demo only contains Prologue and Chp.1 with many features blocked off.  What is the point of showing the options on creating an avatar if they cant be used...?  Most of the in-game play features are usable in Hard and Insane.  Normal and Hard mode are fairly simple, with the latter should take be taking some precaution.  I could barely get passed the second turn in Insane mode.  This makes the game more worthy, and I can practice before the real deal arrives.

SPOILERS!!! Given that Marth's identity has been revealed.  They didn't do such a good job of covering up that he is a she.  The voice actress may have deepened her voice, but it is still too obvious that she was trying to cover up.  Just her speaking defeats the purpose of the mask.

Story wise it felt too much like The Blazing Sword with the details about the world thrown at the player.  The avatar asks what something is so that we can learn, isn't the best way to present the situation.  In the second chapter, I don't know why Marth wasn't available to play as, since "he" is capable of fighting.

It was nice to here the voice, but why only place few standard lines when they could have the entire script read to us.  Either have voices for all or none.  I am not too fond of the graphics, especially at the characters feet.  They look like they are planted underground and their legs don't move.  Lots of changes in that department need to be made. 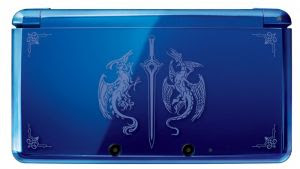 Nintendo has pushed the investments further by bringing the bundled package to us here.  The only difference is that there is no physical game, but it is already programmed on the device.  On the Nintendo's Facebook page, they are doing regular spotlights on the characters of the game.  Also, there is, for the first time, an art booklet for this franchise.  So far only Gamestop is providing.  I am looking forward to these.  The only thing I wish, was the bundle to be an XL version, since I do prefer it better than the clunky fat original.
Posted by JHL at 4:49 PM No comments:

Included in the forth volume VHS of the Hoshineku Full House series is this little single.  Published by the Walkers Company Inc.  Vocals again from the talent group known as LISP, which have not appeared again till recently only on another soundtrack done by Nagaoka.  I'm not sure if they are the same people though.  A chorus joins in this time, name MILK, but no details on what the name comprises of.


My Boy Friend takes the lead as being the fun song with its amazing opener.  Certainly a huge touch of jazz is inserted for this one.  LISP stand out more and each singer can be heard even when singing together.  Despite the girly title, I don't feel it as being singled out for the female audience.  Second song is composed by Hitomi Kuroishi, so it feels a little more conservative in terms of music and pace.  Drums, vocals, and bass guitar are pretty laid back, which give off a romantic love feeling without pushing it too far as such. Both songs are pretty similar to each other, and definitely have a different tone then the singles from vol. 3.   Nagaoka's own composition and arrangement for the first song is certainly stronger then his last in vol. 3, Dancin' Twilight.


Remember, this is the artists first real gig, at least as a solo artist.  Before this it was a few image albums that seemed to be like he was shadowing or interning as for experience.  I did not expect much difference in song making here, but behold there are some marked improvements.  Specifically in Nagoaka's control of the vocals.  Same vocalists but they feel more matured here and while the three vocalists of LISP sing over each other for most of the songs, each singer has a chance to take a few verses individually.  There is no fear of high notes being struck bad or at all, and no problem with the cute sounds of the synth board overlapping the vocals.  So I'm intrigued by how well Mr. Nagaoka has leveled his instrumentation and vocalists.  I still place Honeymoon as the best song of the four.  There is fortunately enough consistency between all of them.  Both single discs are worth the place in anyone's collection large or small.